Why inequality of opportunity matters?

Everyone is born equal. Really? If that is the case, there won't be any need  of one of the crucial functions of state, i.e., welfare. Despite infinite attempts by state to reduce inequality, we can witness a huge gap between the haves and have-nots. The problem lies in the fact that, our policy makers always try to treat the symptom, that is, inequality of outcomes, instead of focusing on the cause,i.e., inequality of opportunity. Opportunity can be defined as the accessibility to something. 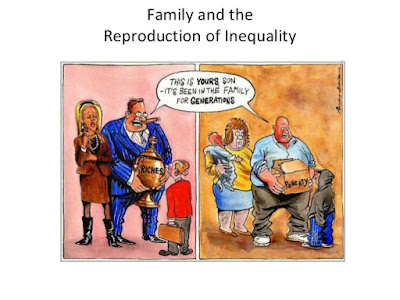 Is inequality inherently bad?
Probably not so, the inequality that emerges because of the different choices and varying degree of ‘effort’ (assuming same circumstances) is fine. But what happens when a person’s potential to succeed in life is simply determined by the lottery of birth?  It is the Inequality of Opportunity which emerges because of factors over which we have little or no control, i.e., ‘circumstances’. To simplify, equality of opportunity means ‘levelling the playing field’, ‘giving everybody an equal start’ and ‘making the most of inherent talents.
विरासत में मिली कुर्सी पे राज करते हैं
फिर भी खुद पे नाज करते हैं।

Of course, our outcomes do reflect our own efforts and decisions. But other people’s efforts and decisions also play an important role, and we have little control over these.
The outcome of future of  a child reflects entirely the efforts and decisions of his parents, but again he has no choice in determining his parents.
Which caste he is in,  what are his limits, which school he will go, what food will he eat, what should be his occupation, what facilities he will get, when and whom to marry- the family has a major say.
In later stage of life, other people’s actions also start to affect the choices and efforts that a person makes – their teachers and their classmates. Because he doesn’t select teachers or classmates, the choices and efforts of that person again gets constricted.

An illustration of inequality of opportunity

We are increasingly becoming obsessed with the outcomes or merit in a person's life, while equality of opportunity is persistently at the back seat. One such example is the advantage enjoyed by a certain section of society by getting education in English medium. Majority of students receive their study in vernacular medium. And once they are forced to adopt English as part of a compulsory paper in some of the most competitive exams (SSC, UPSC), they are thrown out of the competition without giving due attention to the opportunity they received in their education. Their communication skills in English is most likely to be poorer than the students who got quality education with special emphasis on "English". This is evident from the fact that more than 70% students selected in  white collar jobs are from English medium. And it seems like, English has become a symbol of superior civilization.

Another example is the compulsory paper of "computer typing" in most of the Group 'D' clerical examinations. How the people from rural background, who haven't ever seen, how the computer functions, are expected to compete with chitty chatty urban youth.

I m neither against English language nor against usage of computer technology in the present world, as both are becoming the essential tools to compete in the global world. I m just in favor of parity and equality in terms of opportunity.

The foundation of an individual is built in his school, the quality of education he receives there. And unfortunately, here money carries more weight over merit. Because only rich people can afford the schools of better exposure with an opportunity of all round personality development. Is there really a point of putting competitive examination like IIT, PMT after 12th class, by the time a gap based on financial differentiation is already created? Why can there be no competitive exam for entering into a school itself without fees barrier, which might have the potential to create level playing field from the beginning and goes with the principle of merit in pure?

Is reservation the solution?
60 decades of history of reservation couldn't change the picture very much, shows the inherent flaw of the policy. Reservation might send someone at a place which he might not deserve on purely merit criteria as an obligation of representation. This is evident in the dropping out of nearly 90% SC/ST of the total in IIT Roorkee last year because of the excess academic stress. The problem again lies in the approach of addressing the outcome not the opportunity. As an analogy, if a person is made to run in race but he starts 5 m behind, it is likely that he will be behind 5 m throughout the journey, unless he puts extra ordinary efforts.

Though inequality in all conditions boils down to the financial capacity of a person, (in Indian case caste, religion might be the other factors). It seems like money has overshadowed all the other things, like talent.

The only solution I can think of right now to remove inequality of opportunity is "equal quality of education at equal cost" so that the future of nation can be safeguarded. As far as means are concerned, this humongous task cannot be left to Government only. Other people need to come to help others by creating opportunity. This will be the sustainable redistribution of skewed opportunities.

Unless we are not ensuring equality of opportunity, we might be losing brilliant minds such as APJ Kalam in the distant villages devoid of opportunity.
at January 17, 2016