I am happy without kids!!

Today is  Sushma's last day at her office. She is a 32 years old, Senior manager in Tech Mahindra and a seemingly successful woman by all standards of the society. 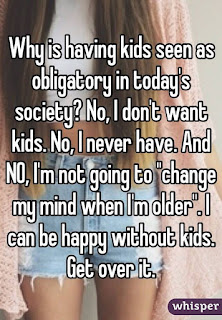 Farewell scene with her two friends Radhika and Maya:
Radhika: Hey Sushma, congrats buddie for your promotion.. You are probably gonna be the VP of the company by next year, right?
Sushma: think so yaar. But not sure, I am planning to move to Jalandhar, may be I have to quit this job before that. My in laws and Sumit are expecting us to have a baby. Sumit has joint family there, it will be easy to take care of me and our baby.
Radhika: What are you talking about? Are you sure, you want to leave this job?
Maya: Are you stupid? Don’t take it otherwise, but kids are just like parasites. Your whole life will revolve around them. You wont be able to roam around. His childhood, his career, his dreams are soon gonna replace yours. Come on dearie, your career has just started to take new heights, and you are ruining it at this crucial stage.
Radhika: See, We are not asking you to not have a baby, delay it for some time.
Sushma: I don’t think I have many choices here, becoming a mother is a magical feeling and moreover I am 30+. I think I should be ready for this now.
Maya: As you wish, don’t regret after 10 years, when I will be the CEO of some company and you would be worrying about the mathematics exam of your kid :D
Three of them started giggling. But the question they raised truly presents one glimpse of thoughts of this generation.

Today, I am writing about a recent trend in the thinking of the new generation. Here, I am ignoring the emotional aspect while talking from a logical and practical point of view.
Conventionally, kids are considered so adorable, lovable and innocent that they become the quintessential part of life after a certain point of time. But in recent times, this necessity is turning into convenience and becoming a well informed decision. For example, many developed countries are facing "no baby boom", where even their replacement levels has shown negative growth like Japan, Germany etc. In India  also, there is a chunk of youth for whom 35 has become new 30 to get married and kids are becoming optional due to delayed marriages or choices.
I have discussed few of the reasons behind this trend in this post.
One reason could be the change in mindset of the present generation. This generation is the generation that "refuses to grow up". Facebook connectivity has brought teenager characteristics into all the generations people specially 25 to 35 group. On a lighter note, they don’t want to be called as uncle or aunty. This shift in mindset is visible  in various forms.

Present youth loves travelling, thrill and adventure. They see kids as the hindrance to their freedom. They prefer to spend their dynamic period of 30 to 35 in fulfilling personal aspirations than meeting family expectations. Career, freedom, fun, independence are their equal priorities along with the conventional responsibilities.

While earlier generation used to consider kids as a medium to increase bond between a couple. Today, many couples fight after becoming parents because they have the grievance that they do not go out as a “couple” instead of “Parents”. For them, child comes as liability at a crucial juncture point. They are not ready to raise a child either mentally, or economically or physically. Parenting is a sudden turning point for them.

Also in the current generation, working parents and long distance jobs are the norms. For them, specially mother, its very difficult to raise a child alone. In previous generations, joint family was a boon in this regard. This advantage is not more with the present generation where metros have become "karmabhoomi" which is far from their "Janambhoomi".

In general, Women suffers a lot in practical life in due course. They face difficulty in coming back after maternity period. In unorganized sector, it is worse. Many organization have provisions for limited leave period while others put barriers on their career growth in one or other forms, eg, pregnant women are not allowed to get on foreign attachments. Getting back with their colleagues after a long break become difficult. As per a survey, 25-27% women leave jobs after they bear a child.

There has been a wider discussion over gender justice and equality. But in true sense, Parenthood responsibility is not yet shared equally. Apart from natural barriers, there are mental barriers that a woman can take care of child in a better way while father has limited role. Even the laws favor the same. In the recent bill to  liberalize maternity leave, there is no mention of paternal leave. The quantum of leave is also different even after the pregnancy period. Childhood is still closely linked with motherhood than fatherhood.

Last but not the least, one reason is that with increasing globalization and consumerism, children are added liability in terms of expenditure. The newly imbibed individualism has decreased the craze for carrying further the generations for the same reason. People are thinking rationally and in a more evolving way. They have their personal aspirations to maintain a child within themselves which they consider to be compromised once they have kids and their responsibilities.

Apart from these general reasons, there are personal preferences. One of our senior Professor(50 years old) didn’t has kids, and when I inquired and came to know about this, I felt sorry for him. His reply on my sorry statement gave me a new perspective of people regarding the subject, "In day to day life, I meet my friends and relatives and find them very disturbed because of their children's deeds like studies, bad habits. Some complains that their children doesn’t take care of them while some who stays with them have grievances of bad treatment. At least I m happy, free from expectations and anxiety I may have if I had children."

This trend may make our demographic pyramid similar to developed countries.
at October 26, 2016