Book Review: We should all be Feminists

We should all be Feminists This book is adapted from the TED talk by Chimamanda Ngozi Adichie of the same name. 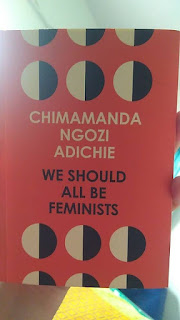 This book is a personal essay where she talks of the experiences of sexism she faced in Nigeria. It eloquently discusses what feminist means contrary to what it is assumed to be. Feminism is more of equality rather than preferential treatment to one or other sex (I have written a blog post on similar lines: Modern feminism: Equality). Equality is the core of feminism only to be seen with the lens of inclusion and awareness. She argues that the first step to cure discrimination is to acknowledge it and that acknowledgment can come only with the personal touch or an extreme level of empathy. She strengthens and makes her explanation more convincing by exploring the other side too- how the gender divide hurts both the sexes almost equally. As it is only 50 pages long and intriguing book, it’s impossible to leave this book in between and it definitely leaves you with food for thought. Though the author has shared her own experiences and has hardly discussed anything in great detail. Yet further interpretation and exploration is left up to readers who can ponder over their own life and further think or write another 50 pages quoting their own experiences(I was able to do so :P). These instances mostly go unnoticed in our society most of the times, this book helps you pause and think about fresh dimensions of such instances. I clicked a few pages and forward it to my friends narrating the specific instances in past.  This book is a perfect piece where you read less, but have a great takeaway. This book is tiny, insightful and a brilliant short read.  I read this book and became a part of chain (second so far). Passing it on, I recommend this to everyone. Especially, the youngsters who are recently introduced with the concept of feminism.
at November 16, 2018