Stephen Hawking, the most renowned scientist after Einstein, narrates a coincidence that he was born exactly 300 years later, i.e. 8th Jan, 1942 after Galileo died, i.e., 8th Jan 1942. It dawned upon me to find another coincidence, that I was born on 50th birthday of Stephen Hawking, i.e.,8th Jan 1992 :D. 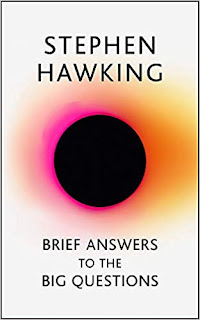 He has brilliantly linked science(physics to be specific) and mathematics with the real life social and humanitarian problems, thus bridging the gap between elite scientist and common man.
He has been able to present the science in a very engrossing and lucid  way. The big questions he deals are: Is there a God? How did it all begin? Is time travel possible? What is inside of a black hole? Is there other intelligent life in the universe? Will artificial intelligence outsmart us? How do we shape the future? Should we colonize space? Can we predict the future? Will we survive on earth?
I wasn't expecting concrete solutions for these questions, but Stephen Hawking is able to explain these complicated and highly unpredictable questions in a way that everyone would understand while providing food for thought and firing the imagination of the reader.
The complicated and intellectual stuff is blended with his sharp sense of humor- comments on Trump, stupidity of human race etc. Initial 4-5 chapters are science laden. While the last three chapters are crucial for the present world- the future of our planet, colonization of other planets, and the rise of artificial intelligence. He charts his strategy to save us. He suggests science to be the only savior to these problems.
There are far too many mentions of Star Trek(have put it in checklist) surely underlining his vision for the future of humanity. Few harmless repetitions are out there giving a feeling that all the independent essays are just sequenced up, lacking a coherent compilation. The justification lies in the fact that the essays were written as independent modules by Stephen Hawking and the book was completed by his academic colleagues and family member after his demise. The final touch up might deserve more attention.
To sum up, the title does justice to the content, a great introductory collection of essays to big ideas. It is a masterpiece for school students, under graduates or layman to understand the very basic problems of science and their importance in life.  As he lived his life with optimism, never give up attitude and a great vision for humanity, he suggested scientific literacy to be an essential component for future.
I would recommend this intellectually stimulating book to the leaders of global world, including politicians to realign their priorities to what matters.
Quotes I liked from the book:
"If you look behind every exception person there is an exceptional teacher"
"Remember to look up at the stars and not down at your feet. Try to make sense of what you see and wonder about what makes the universe exist. Be curious. And however difficult life may seem, there is always something you can do and succeed at. It matters that you don't just give up. Unleash your imagination. Shape the future."